Before now, you may have asked yourself how footballers are paid. It is very normal to ask such a question because football is one of the world’s popular team sports.

Due to the popularity of this sport, the demand for proficient and highly rated players has significantly increased as teams look to compete at the highest level.

This study aims to carry out a thorough analysis based on the allocation of salaries to different footballers.

Where do footballers get their money from?

An overview of player salaries in major European football leagues shows that the areas that frequently affect the salary are mostly consistent, but some differences still exist.

The wage of a football player is premised on various aspects.

Based on these aspects, decisions on footballers’ salaries are through negotiation between the player’s agents and team management.

Remuneration for footballers varies between leagues and clubs, as wage standards for one league can depend on the economy’s strength or the popularity of football in the country.

All these factors determine the different salaries for different players.

When do footballers get paid?

Football players get paid by their clubs according to the details of their contracts. Contracts change over time, so these numbers will undoubtedly change.

Some players get paid weekly, and some get paid once a month. Payment is predicated on the contract agreements signed between the player and the club.

Below is a list of highly paid football players, which will provide insight into the earning power of footballers.

When signing a contract, a list of conditions must be fulfilled by which a player gets paid. For example, some get bonuses per goal, appearances, etc.

They do get their paycheck every week regardless of the fixtures. However, in some cases, a player does not get paid by the parent club when the player goes out to play for a different club on loan.

Instead, his wages would be paid by the club, loaning him until the day his loan spell ends.

In other cases, the salaries will be paid by both clubs at an agreed percentage ratio split.

Do footballers get paid when the season is on break?

As much as players get paid during the off-season, this depends on the player’s kind of contract with the club. On most occasions, players have an annual base salary that they get from the club, as detailed in their agreement.

On most occasions, clubs leave a little bit of money to the side to pay their players in the offseason.

Do injured footballers get paid?

Football players get paid even if they are injured and sidelined for months.

They get paid irrespective of whether there is a match, whether they play, or even when they are injured.

Do footballers get paid per hour?

Depending on the contract details, some players get paid for every hour they play for the club. For example, a football player in the Premier League averages $298 per hour.

However, this is considerably higher in the instances of better players like Cristiano Ronaldo.

Therefore, the quality of the player will ultimately determine how much the player would be paid per hour.

Why is there inequality between male and female players’ wages?

The gender factor affects the pay of footballers.

A survey in 2018 showed that 88 percent of the world’s professional female soccer players earned less than $24,000 per year.

Questions have been asked on why female players get paid less than male players, even when they represent the same club or country badge.

This difference is forty-six times the revenue generated from the women’s world cup.

The revenue generated from the same competition but two different genders necessitates the payment of male footballers compared to female footballers.

Do footballers get paid While On international duty?

Although international appearance is more about pride than money, football federations of various countries still pay their players to represent the country.

However, compared to the salaries received from club contracts, players are only given bonuses for representing their various countries by their football federation.

Clubs are not responsible for the payment of international bonuses.

Medium of payment of players’ salaries

Most footballers’ salaries are paid into their bank accounts by the clubs.

However, when the clubs have an existing partnership with a bank, they make their players open accounts with the bank and make it the means of payment of these players’ salaries.

According to the “Global Sports Salary Survey,” the pre-pandemic average salary for a footballer playing in England’s Premier League was a staggering £60,000 a week.

The table below analyzes how much a footballer would pay in tax and NICs. 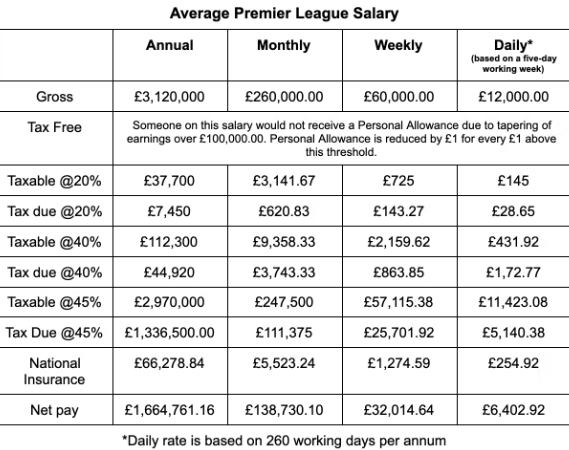 How do clubs generate funds to pay huge salaries?

As earlier stated, football is one of the most popular sports worldwide, and this fame has enabled the sport to generate immense revenue.

However, the revenue generation is not restricted to merchandizing, matchday revenue, competition, prize money, TV broadcasting, and player transfers.

A team’s ability to earn money is also reliant on their success on the pitch. These successes produce the sponsorships they attract, influencing the club’s commercial appeal.

Learn more on how football clubs generate their revenue.

Whether a player is overpaid or underpaid is relative because players are not paid strictly according to their on-field performances.

Like all professions, football players get paid for the significance that we confer upon them and other conditions in their contracts.

This means they earn the amount they do because we are willing to pay them.

But we must also note that the better the footballer and the more brilliant the agent, the higher the chances of a lucrative salary.

Whether players are overpaid or not is a discussion for another day.